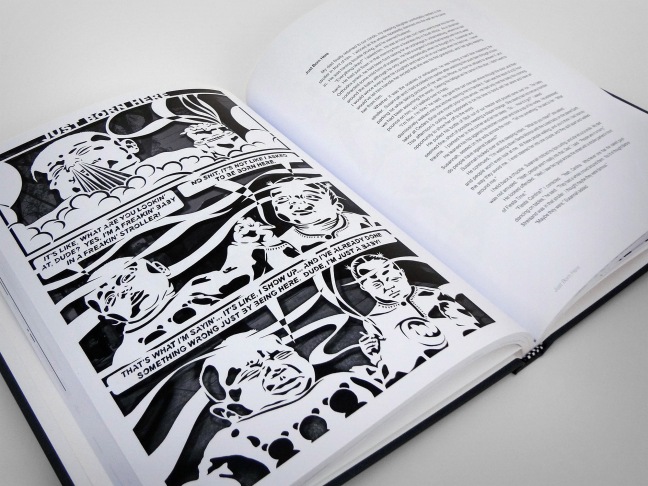 Unemployed and insecure, artist Karlsen Clay bitterly follows his girlfriend’s success to the flamboyant gay mecca of Southern California, West Hollywood. As Clay struggles to find his place amongst the sports cars and bondage shops, his artwork and essays depict a humorously dark interpretation of Los Angeles at the turn of the century. Twisted, unexpected, entertaining, and endearing, Gendergarten subtly explores a time when cities like West Hollywood faced a beginning and an end as they transformed our nation from the inside out.

The plane touched down with an audible thump, spilling the martini next to me onto its owner’s designer jeans and Pradas. For a moment, I’d forgotten where I had just landed.

“Oh, goddammit,” my neighbor uttered over the violent braking of the jet. I remembered I was in Los Angeles. “Figures I made it the whole way here without an accident and this happens now,” he said.

I methodically rubbed my hand over my freshly shaved head and watched the terminals float past the window as we taxied in under the pink sky. Hours earlier, riding the express train south to Grand Central, I had passed thousands of New Yorkers in an instant. Now, watching the neatly tucked aerobridges leaning on their rolling pillars, we lazily crept past LAX like a lost ship drifting into port. The pace seemed fitting. After a lay-off and a failed design business, I was an out of work industrial designer and had nowhere to be anyway. I had already shipped my belongings to this city I had yet to set foot in, one in which my girlfriend, Susannah, was the only person I knew.

The situation was a familiar one. Years earlier, I had followed her to New York after falling in love with her in college. She had moved there the year before I did, marketing movies with an ad agency in Midtown. The day after my own graduation, I packed whatever fit into my Bronco and sped from Rochester to Astoria, Queens – our first apartment. I felt so progressive at the time, the man following the woman. I didn’t care how things turned out. I yearned for the grit, the grime, the romance of being a starving artist. I thought of myself as a New Yorker before I had even arrived. I couldn’t wait to start our life there.

Today, things were a little different. I had been dragging my feet for as long as possible. Susannah had been in LA for six months and had fallen in love with it. She had already found a place on some palm tree lined street called Flores and had settled into the cushy studio job that had moved her to LA. For months, I stubbornly fed her promises, as empty as our Upper East Side apartment, that my business was about to take off, all along knowing that my move to LA was inevitable. Over the phone, I would listen to her stories of limo rides, evening gowns, and award shows while frugally limiting myself to a slice of pizza a day. I missed her horribly; it wasn’t that I didn’t want to be in LA with her, I just didn’t want to leave New York. The city was my Porsche, and I wasn’t ready to downgrade to the reasonable car, even if I couldn’t afford to keep it. LA scared me, as did Susannah’s success. I didn’t know what I was going to do, but I knew I wasn’t ready to leave.

At month six, things had gotten so dire that I had already shipped Susannah my remaining belongings but still had not purchased a flight. I was hanging on by a thread, sleeping in an apartment that had nothing but a futon mattress. I had worked my final day at a temp job answering an executive’s phone in Trump Tower and had awkwardly said my good-byes to my colleagues of three weeks. I didn’t care about losing the job. It was stuffy and the guy never got any calls. Plus, I had to wear the same suit everyday because I had sent my wardrobe to Susannah. They told me that my services were no longer needed because the girl I was sitting in for was returning to work, but I suspected it had something to do with my recent choice in hair-style.

The day before, my friend Adrien, a fraternity brother and now packaging designer, had tipped me off that Clairol was looking for guys to participate in a hair-dye focus group. It would take about an hour and paid $250. I stopped by Clairol immediately after work and signed myself up.

The waiting room looked like the competitors you find at Halo GameWars, desperate geeks all anxiously crowded around a set of glass double doors. It looked as if none of these guys had ever been on a date. Every two minutes or so, a random Clairol model would sashay through the doors, call out one of our names, then escort the lucky winner into the back. I was in nerd heaven. Ironically, I looked like the put-together one in my $150 Macy’s business suit.

“Karl?” one of the models called out. She was blonde with a stone-faced, professional, and intimidating expression. She sat me down at a barstool in front of a sink and adjusted two curtains so I couldn’t see the guys to my left and right. Bright vanity lights illuminated our reflections as we made eye contact in the mirror. She looked like an angel.

“Well…” she said. On the counter in front of me was a small box of hair dye with a good-looking guy smiling on it. “What are you waiting for?” she continued. She clicked a stopwatch, scribbled on her clipboard, sat back, and watched me.

Awkwardly fumbling with the box and folded instructions inside, I managed to mix up the various ingredients, shampoo the potion into my hair, and then sit back in my chair to wait the required twenty minutes to let it soak in. She humored me with chitchat for a bit, then went back to the clipboard.

“So how do you like the packaging on the box?” she asked me.

“Oh… It’s cool, I guess,” I responded, now overly analyzing the smiling man on the front.

“Did you find the instructions easy to follow?” she asked.

“Yeah, I did. I’m looking forward to seeing the result.”

She snickered to herself, and I caught her glancing at my hair. She’s flirting with you, I thought.

“Have you ever dyed your hair before today?” This time her eyes wandered past the curtain to my left and she flat out laughed.

I laughed from contagiousness. “What?” I said.

“Nothing,” she replied, and pulled herself together. “Please answer.”

“Um… I’m just here for the money, I don’t typically…” She covered her mouth with her clipboard and tightly closed her eyes.

“What?!” The voice of the guy to my left yelled out and startled me. I peeked around the curtain and beside me was a portly guy in his twenties wearing a sweat suit. I remembered him from the waiting room. His gorgeous interviewer was holding her mouth with her hands. His head was entirely bleached blonde except for a giant black handprint on the back of his head where he had missed a spot. As I panned the room, I saw that all of the men seated at the sinks had dark splotches and finger-marks randomly covering their heads, and all of the models were laughing. I awkwardly tilted my head to the side and looked over at the mirror.

My interviewer made a fist and covered her mouth as she exasperatedly laughed out loud. My head had three stripes of brown up the side. It looked like I had rubbed sun block all over my head on a sunny day but had fallen asleep halfway through. She was cackling now.

After a rinse and hostile financial exchange, I exited onto a crowded Fifth Avenue, check in hand, passing a homeless man who was camped out in front of the building. He erupted into laughter as if he’d been waiting for me.

“Hey look, everybody,” he yelled to the pedestrians. “It’s Slim Shady!” He fell to his knees laughing. I fished through my coat pocket for my phone. Across Fifth, I saw Portly Sweat Suit sprinting to a cab. He may have been crying. A few paces in front of me was a briskly walking Jewish guy with messy blonde streaks streaming out in a random pattern from under his kippah. He was almost running. I hit the Adrien button on my phone.

“Hey, thanks for signing me up for the circus, dude,” I said.

Adrien laughed. I heard him whispering to his wife, Madison. “It’s Karl, he went to Clairol today,” he snickered.

“Whatever,” I said. “Just get your hair clippers oiled up, I’m on my way over. I gotta go to work tomorrow so…”

He interrupted, “Wait, wait… But what did you think of the smiling guy on the front of the…” I hung up.

Gendergarten is a humorously dark interpretation of Los Angeles at the turn of the century when cities like West Hollywood faced a beginning and an end while transforming our nation from the inside out.

Access Mundane is a gimlet eye glimpse into the lives of thirty deeply complex people within one of the nation’s most notoriously shallow cities.

Burning Coal Books was established in 2014 as a micro-publishing arm of Karl Clay LLC of West Hollywood. Through fine arts and expressive writing, BCB focuses its themes around the film and fashion industries and Los Angeles-influenced pop culture.